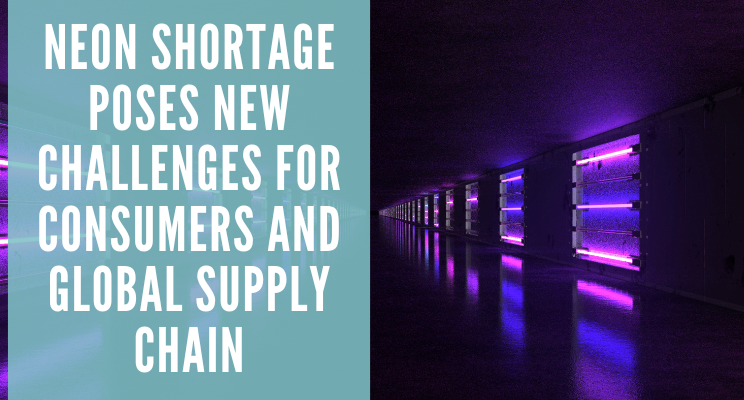 There are many tragic effects of the ongoing conflict in Ukraine. With the loss of life and devastating consequences of war being center stage, the disruption of neon production is probably something you don’t think much about.

But Ukraine and Russia are major players in the neon supply worldwide. And this seemingly insignificant element is more critical for your daily life than you may think.

What Makes Neon So Important?

Neon is probably best known for its ability to light up the night sky through colorful signs. But this odorless and colorless gas is essential in manufacturing electronic gadgets and technology we rely on every day, including electronics, computers, cars, phones, and even aircraft.

The problem is that getting neon for use in manufacturing isn’t easy. It is normally captured directly from the air. This process requires that manufacturers use air separation technology to remove liquid neon from the air, separating it from other elements like oxygen and nitrogen.

What further complicates this process is that neon makes up only a fraction of one percent of the air around us. So air separation technologies must be applied to a lot of air to produce the quantity needed for manufacturing. This reason is why steel plants typically supply neon, as they use this technology already in steel processing. Steel plants in the former Soviet Union are important suppliers of neon worldwide.

The Demand for Neon

Though neon is used in various ways, such as laser eye surgery and signage, its importance is predominantly in microchip production. Lasers rely on neon to turn silicon, which is the principal ingredient in microchips, into tiny circuits that make electronic devices work,

More specifically, lasers are crucial in lithography, which takes place once long silicon cylinders are sliced into very thin silicon sheets. Manufacturers of silicon chips use lasers for etching tiny patterns on the glass. This step begins the transformation of silicon sheets into sheets of microchips.

As these microchips are extremely tiny, the exact wavelength of the laser must be carefully controlled. This need is the function of neon.

So making a microchip requires a precise laser regulated by neon. The neon predominantly comes from steel plants located throughout the former Soviet Union. So, where does Ukraine come into this?

The Role of Ukraine

The neon from the steel plants needs further processing before it can be used to manufacture microchips. And Ukrainian companies account for most of this processing of crude neon to a usable form in microchip production.

The total global demand for neon in semiconductor production was 540 metric tons in 2021. Prior to the invasion by Russia, Ukraine supplied 45- 54% of the neon used in chip production. The Ukrainian company, Ingas, supplied 15,000- 20,000 cubic meters of neon monthly, with 75% of this used in the microchip industry. Another Ukrainian company, Cryoin, supplied between 10,000- 15,000 cubic meters of neon monthly. However, as the invasion of Ukraine began, neon production came to a halt.

This disruption has placed greater demands on other suppliers of neon, including China, the second-largest supplier of neon globally. Prices of neon in China have climbed sharply since the plummet in neon production in Ukraine.

How Did We Get Here?

So how has the world become so dependent on Ukraine and the Soviet Union for neon? This reality reflects decades of free trade policies, globalization, and the ability of firms to transport products in shipping containers during the assembly process. This system has allowed countries to carve out their niche in the supply chain, as Ukraine has accomplished in the semiconductor industry.

The problem is that this system is very risky. It can create dangerous working conditions and can leave people worldwide without critical technology for work and everyday life.

However, the industry has been taking steps over the past decades to address these risks. Following Russia’s annexation of the Crimean peninsula in 2014, and the price of neon subsequently skyrocketed by around 600 percent, firms began questioning the stability of the neon supply from Ukraine. Likewise, for months leading up to the invasion of Ukraine in 2022, U.S. companies were advised by the White House to locate neon suppliers outside of Ukraine.   Nevertheless, Ukraine remains a major global supplier, and the semiconductor industry remains vulnerable to disruptions.

With no solution in sight, the decrease in neon production will have far-reaching effects in 2022 and beyond.

The semiconductor industry is extremely important in global manufacturing. Semiconductors are used in everything from computing to healthcare to transportation.

Technology manufacturing relies on the global effort to provide specialized production. This involves many companies sometimes clustered in one country. Intel, Samsung, and Apple are able to reduce costs by purchasing components from efficient third-party firms. However, the ongoing conflict in Ukraine serves as an important reminder of how integral all parts of the supply chain are in ensuring the smooth production of goods.

The current slowdown in neon production is the latest threat to the stability of global supply chains. But this event is simply one of many disruptive events in recent years. For example, the outbreak of Covid-19 slowed down microchip production and the transportation of microchips across borders. Other recent events like the power outages in China, extreme weather events in Texas, and fires in Japan have also contributed to uncertainty in future supply chain operations.

In response, the industry has looked for ways to mitigate external risks. Countries such as China, the European Union, South Korea, and Japan have either initiated programs or are in the process of developing their chipmaking capabilities. Also, the U.S. is considering plans to invest in excess of $52 billion to kickstart its chip industry.

It is unclear how these changes will impact global supply chains. But what is certain is that nations and companies alike are actively seeking to improve operations and reduce risks from external sources.

The shortage of microchips available globally poses problems for many industries. And without a clear solution in sight, this will have far-reaching impacts on many products we use every day.

For example, BMW was forced to drop some of its touchscreen functionality of vehicles. Their infotainment systems will still work, but users will not be able to control their system using their touchscreen on new models. This is due to the lack of supply of chips to power critical devices.

Cadillac also faces production challenges. They have had to drop hands-free Super Cruise on some 2022 models.

Ford has been hit even harder by the microchip shortage. Many unfinished models have been stored in an open lot as they await their required chips.

These examples all point to the same thing moving forward. The current supply of electronics is precarious, and a potential solution is not evident. As a result, products on the market are dropping functionality relying on microchips. The extent of these changes will depend on the severity and period of the shortage.

With the overall rise in prices we see today, problems with the neon supply coupled with a chip shortage don’t provide much hope for a turnaround anytime soon.

Worldwide consumption of neon by the semiconductor industry alone was approximately 540 metric tons in 2021. Given the share of Ukraine’s supply of neon, the available supply could plummet to less than 270 tons in 2022. This reduction threatens to raise the prices of neon and all products that use neon.

The neon supply is yet another factor that looks to keep prices rising in 2022.

But There Is Room for Hope

The current conflict in Ukraine is having disastrous consequences on the lives of everyone. But somewhat of a silver lining may be that current efforts to improve supply chains in neon production and microchip manufacturing may better prepare us for future events.

In the near term, the short supply of neon and shortage of microchips pose many problems for consumers and companies alike. But with a global effort to tackle these challenges, hope remains for workable solutions for both the ongoing conflict as well as for the global issues of production and use of neon.

Is There a Way to Wake Up From ERD (Early Return Date) Nightmares?

Fuel surcharges can add up quickly, regardless of your shipping method. Aimed at offsetting fluctuating oil prices, fuel charges can become a thorn in the side for many ocean exports, freight shipping, supply chain, and logistics organizations. Fuel surcharge origins...
Read More

Everything in your home, on the shelves of your stores, and in your warehouse spent at least some time on a truck. For years we were warned that if truckers stopped, we would feel it in ways that we couldn’t imagine. Well, we’re feeling it - we are all feeling it. And...
Read More