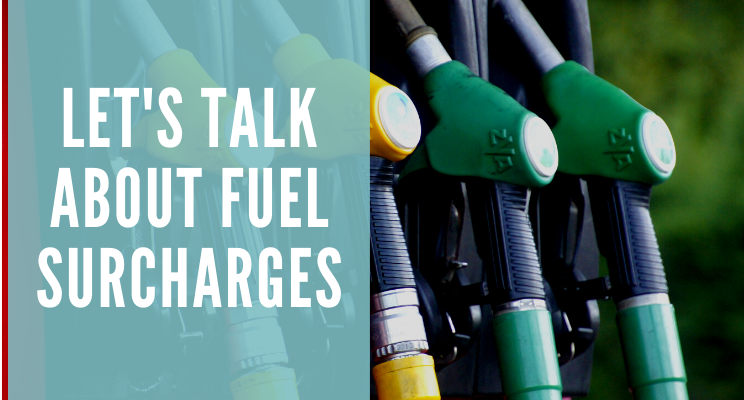 May 6, 2022 | Transportation and Supply Chain News

Fuel surcharges can add up quickly, regardless of your shipping method. Aimed at offsetting fluctuating oil prices, fuel charges can become a thorn in the side for many ocean exports, freight shipping, supply chain, and logistics organizations.

The Nixon administration implemented a national retail diesel average with hopes of mitigating price fluctuations. Following the oil embargo, consumers saw gas prices jump from 38.5 cents per gallon in May 1973 to just over 55 cents per gallon (55.1) in June 1974.

The surcharge was eliminated when prices leveled out but returned in the late 1990s following a steep upsurge in diesel prices.

How are fuel surcharges calculated?

Carriers typically have their own way of calculating fuel surcharges based on the Energy Information Administration (EIA) ‘s weekly National Average Diesel Fuel Index, which they apply on either a percentage or per mile per gallon rate to the total freight charge.

Customers were already feeling a pinch at the pump thanks to supply chain congestion that increased year-over-year costs.In February of this year, Russia’s invasion of Ukraine only added to the trouble, triggering a significant international fuel surcharge spike. The national average diesel price on January 31 of $$3.846 per gallon jumped more than a dollar in less than six weeks, to $4.849 on March 7.

Why did Russia’s actions significantly impact the US market?

The oil market remains a global market, and what impacts one can cause havoc for all. And that’s where things can get complicated for US-based shippers. Russia has long been a major global oil and fuel player, with Europe and China purchasing 80% of Russia’s 2021 oil exports (60% and 20%, respectively).

Russia’s military actions sparked a sudden flurry of international buyers exploring other oil-producing nations like Venezuela and Saudi Arabia. As more and more buyers began moving elsewhere for their oil, the global community met oil’s shrinking supply with increased costs. And as if this wasn’t enough, many OPEC members had already slowed oil production in 2020 in an effort to mitigate damage from a drop in oil demand, a rippling effect of doing global business during the initial stages of the pandemic and early parts of last year.

How are surcharges affecting people in the industry?

Fuel surcharges are an attempt for many carriers to plan for fuel price variations. Considering that fuel costs account for the lion’s share of most transporting costs and that many contracts are locked in well in advance of actual usage, it’s easy to see why budgeting and preplanning can be a challenge. Covering fuel surcharges means increasing overhead at all points along the supply chain, and more money on fuel means everything dependent on that fuel will cost more.

Is there a way to minimize the impact of fuel surcharges?

Fuel surcharges are a fact of shipping life.

In light of Europe’s new war, many oil-rich nations are debating whether to increase production and help stabilize prices or allow the market to run its natural course, leading many to believe fuel surcharges won’t settle down anytime this year. Add to that an already stretched supply chain and shippers can expect to experience volatility in fuel surcharges for the foreseeable future.

Is There a Way to Wake Up From ERD (Early Return Date) Nightmares?

Fuel surcharges can add up quickly, regardless of your shipping method. Aimed at offsetting fluctuating oil prices, fuel charges can become a thorn in the side for many ocean exports, freight shipping, supply chain, and logistics organizations. Fuel surcharge origins...
Read More

Everything in your home, on the shelves of your stores, and in your warehouse spent at least some time on a truck. For years we were warned that if truckers stopped, we would feel it in ways that we couldn’t imagine. Well, we’re feeling it - we are all feeling it. And...
Read More