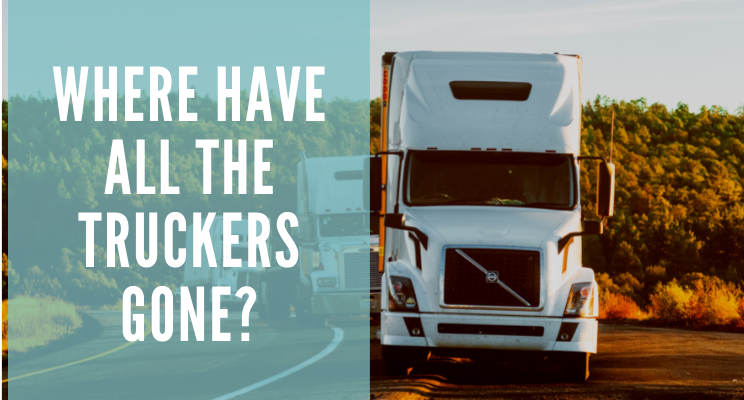 Everything in your home, on the shelves of your stores, and in your warehouse spent at least some time on a truck.

For years we were warned that if truckers stopped, we would feel it in ways that we couldn’t imagine.

We get it. At OL USA we understand that the trucker shortage is hitting everyone right now. When you consider that about 72% of American freight is moved by trucks at some point in its journey, it’s easy to see how a shortage would certainly hurt. Whether you’re a point on the supply chain or a customer, you are no doubt feeling the pinch like a new pair of shoes that you can’t quite break in. Truth is, we don’t want to break them in! We want our old shoes back!

We want our truckers back!

Let’s take a look at how we got here and what it’s going to take to find our way out of it.

If you’ve been on social media lately, the land of infinite conspiracies, you’ve likely seen some ideas tossed around about the state of US truckers. Most of it is completely bonkers so it might take a minute to sort it out.

Coming on the heels of the Great Supply Chain Disruption, thanks to the pandemic, everyone has been stretched to the limit. Ports were closed, cargo ships were stuck in the ocean, port in site, unable to unload or load. Port became overwhelmed as they turned into forests of shipping containers. It was the world’s biggest bottleneck. Nothing was moving.

This trucker problem is not new though. It’s just at its tipping point it seems. The American Trucking Associations reported that in 2021 there was a deficit of 80,000 truck drivers in the United States – a record that we’d rather not have broken.

What’s the Problem? The Reasons Behind the Shortage

Conspiracies aside, the reason for this shortage is simple – bad jobs. There are plenty of drivers.  In 2019 there were more than 10 million commercial driver’s licenses held by Americans and just 3.7 million trucks that needed those drivers.

The dissatisfaction is not new, but it has been on a long, low simmer for several decades. The 1980s saw a slight shift from lucrative business to silently, slowly plummeting industry. The Teamsters had been keeping the industry driver friendly, ensuring good working conditions and good pay, but then-President Carter’s administration thought it would be a great idea to deregulate the trucking industry – to create a little competition.

This was like a huge green light for a flood of new trucking companies to enter the arena. Problem is, it did not make the industry better but turned it into a third-world mentality with abysmal driver pay and worse conditions. Drivers had more demands but no resources or support to meet them in a way that didn’t carry dire costs to their health and wellbeing. It doesn’t help that the highway is a dangerous place. According to the DOT, a truck driver has a significantly greater chance (10 times more to be exact) of being killed on the job than the average worker in the U.S.

And as the government is wont to do, the fed spent the next several decades implementing laws and regulations in an attempt to “fix” what they broke. Less time on the road, more time in the berth, and other restrictions. On the surface, this sounds great, but look deeper and you can see that even the time constraints can leave a driver parked in the middle of nowhere on the shoulder of an on-ramp for 10 hours.

They were pushed and pushed, then they began to push back.

The pandemic hit and brought the entire freight industry to a screeching halt – or at least a crawl. This added to the stress on an already overworked, underpaid industry and it broke.

Now trucking companies are scrambling, offering extremely generous sign-on bonuses, benefits, and plenty of perks. They keep throwing incentives at drivers, hoping that something will stick.

What Has to Change?

If we are going to get back on track and get freight moving, things need to change. The trucking industry needs to change. Drivers need better conditions where they are not perpetually hungry, tired, and dealing with a lousy schedule. They need a work environment that is not conducive to health conditions like diabetes, hypertension, and heart disease.

Ports are slowly opening but while it looks positive on the surface, it is just added stress on overtaxed truck drivers.

What needs to happen is more drivers need to actively work in the industry.

What has to change in order for that to occur is a total revamp of trucking.

The truck driver shortage is changing the face of logistics, but there are ways shippers can manage:

Keep your bottom line in sight and make adjustments as needed.

Transportation prices are increasing as everything gets more expensive and it drives up rates. Factor in these costs and make adjustments as soon as possible to prevent delays.

Have a plan in place for transportation problems or challenges. Whether it’s a driver shortage or more pandemic port closure madness, try to come up with a Plan B that you can put into place quickly.

Select a transportation partner that works with you.

Not all trucking companies are created equal. Find the one that is right for you, knows your industry, and you have the confidence to get the job done. Look for a collaborative relationship and keep things moving.

Don’t let the trucker shortage bring your operation to a halt. Partner with OL USA and let us help you keep your supply chain moving. Call today to learn more.

The global economy has gone through an awful lot of changes over the past several years, which is nothing new. We’ve all been pointing fingers at the pandemic concerning economic disruption, and for good reason—it’s disrupted trade to a degree we haven’t really seen...
Read More

Early return dates (ERDs) can give anyone the chills. For example, imagine you just successfully finished a grueling negotiation to deliver a large shipment to an overseas buyer. Your company organized a trucking company to transport goods to the port over the next...
Read More
← Beyond Right Now: What China’s COVID-19 Lockdown Might Mean for Ocean Exports in 2022 Let's Talk About Fuel Surcharges →
Cookie Consent with Real Cookie Banner