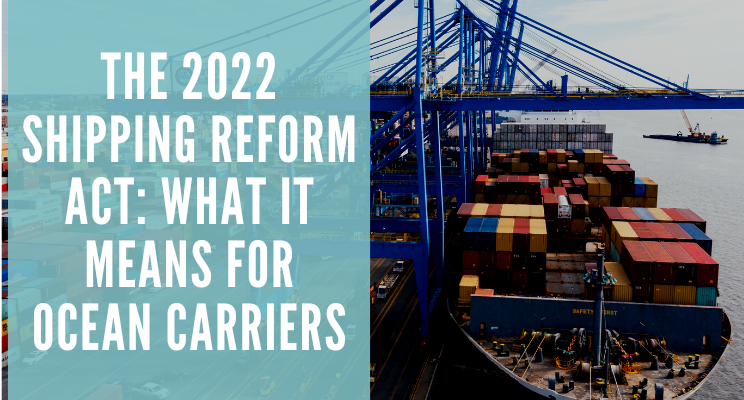 On 16 June 2022, President Joe Biden and a number of prominent senators, led by Senator Maria Cantwell, Chair of the Committee on Commerce, Science and Transportation, gathered in Washington D.C to sign the first major revision of US maritime legislation in two decades. The Ocean Shipping Reform Act (OSRA) of 2022 will usher in a new era for international trade that is bound to have far-reaching consequences for huge numbers of people around the world.

The primary goals of the Ocean Shipping Reform Act are to strengthen the maritime supply chain and unclog overloaded U.S. ports that have seen goods languishing for days and sometimes weeks. It aims to do this by empowering the FMC to ‘protect the interests of U.S. businesses that rely on ocean transportation.’

Economics is central to the new legislation. With recession looming, legislators are looking to take bold steps. Clearly, inflation has emerged as the biggest concern that the administration is facing, and the lawmakers who drafted OSRA clearly believe that driving down shipping costs will be a decisive blow to the runaway inflation that is being felt worldwide.

But the new legislation has come in for a fair amount of criticism from some important quarters, in particular the World Shipping Council. This body represents most international ocean carriers. After all, these carriers are the ones that shouldered most of the blame for the rising shipping costs of the last few years.

What Led to the Ocean Shipping Reform Act?

A lot has changed since 1998, politically, economically, and technologically and it’s no surprise that laws that were drafted in the last century would leave gaping holes in the brave new world of 2022. Clearly, an update to the law was long overdue.

The Ocean Shipping Reform Act, championed by Senator Cantwell, was introduced into the Senate in February 2022, passed by the Commerce Committee on March 22nd, unanimously passed through the senate at the end of March, and was signed into law by President Biden on 16 June.

In a press release, the Senate Committee on Commerce, Science, and Transportation boldly stated that it intended to provide equal opportunities for both American importers and exporters using the bipartisan Ocean Shipping Reform Act of 2022.  It aims to do this by providing the FMC with various tools for effective oversight in the hopes that this would help the FMC crack down on unfair practices that are harmful to both American businesses and consumers.

It’s no surprise that shipping costs have skyrocketed since the Covid-19 pandemic turned the world upside down in January 2020. Bloomberg News reported that the average cost of shipping a 40-foot container from China to the U.S. West Coast is $7,980 – more than double what it would have cost a year ago. And near-term movements are just as bad, having risen by 47% year-on-year.

Clearly, this situation is unsustainable, and action needs to be taken.

Encouragingly, the same article reported that there had been some price relief in recent weeks. Lee Klaskow, a senior transport analyst at Bloomberg Intelligence, sums it up neatly by explaining how the rising threat of a prolonged recession , not to mention strict coronavirus-related lockdowns in China — has contributed to lower rates.

In trying to regulate the industry more aggressively, the new Act has given more power to the Federal Maritime Commission (FMC), the independent federal agency that is tasked with regulating international ocean shipping and certain carrier practices to promote the growth and development of U.S. exports “through a maritime system that is transparent, efficient, and fair.”

Ocean Carriers Not to Blame for the Shipping Reform Act

The media was quick to blame the steep rise in costs on ocean carriers that, in their view, were exploring the situation for profit. But the overall situation is far more nuanced than that, and it requires a detailed understanding of the complex dynamics at play in international trade.

Many of the cost pressures have come from unexpected quarters that could not possibly have been planned for. For example, very few analysts predicted President Putin’s invasion of Ukraine and the united response from the West, which excluded Russia and Ukraine from the well-established international order.

The World Shipping Council came out strongly against this characterization of ocean carriers as being to blame, stating in no uncertain terms that “recent weeks have seen several attempts to demonize ocean carriers by deploying ‘us versus them’ rhetoric. That is not only inaccurate but dangerous, as it undermines the ability to understand and work towards solving the root causes of America’s supply chain problems.”

The council went on to illustrate how ocean carriers are a vital, long link in the global supply chain and play an incredibly important role for American businesses, government, and consumers. The statement from the Council explained how, even though it was understandable for regulators to ask questions about the current market conditions, liner shipping is already a very closely monitored sector of the economy and that carriers have already those questions. They said that “ocean carriers actively compete against one another in the global marketplace, including on the shipping lanes most relevant for U.S. trade.”

In its response, the Shipping Council went to great lengths to make sure that people understand that there is a confluence of factors at play, such as the ongoing war in Ukraine and the very strict lockdowns in the port of Shanghai, and strike action in the United States ports. Each of these global issues is contributing to rising prices, and to lay the blame at the feet of ocean carriers comes across as a form of scapegoating and cherry-picking the facts.

In fact, earlier in the year, the FMC themselves seemed to acknowledge that ocean carriers were not the only reason for the high costs when Commissioner Dye released the Final Report for Fact Finding 29, which stated clearly that while markets are competitive and the high ocean freight rates in the United States have been determined by unprecedented consumer demand, the supply of vessel capacity was overwhelmed.

No doubt there has been a lot of frustration about rising prices in the markets, but it does come across as political posturing to lay the blame on ocean carriers. Senator Cantwell’s remarks play well to the very important farming lobby. In her remarks at the signing ceremony, she noted that American farmers cannot be expected to carry the burden of skyrocketing shipping costs and that the new law will “level the playing field between big international shipping lines and agricultural exporters.”

In the next section, we’ll take a closer look at some of the consequences of the new bill for those involved in global trade.

As mentioned earlier in the article, the Act gives the FMC far more power to take a more proactive role in investigating the behavior of ocean carriers, enforcing carrier obligations, and establishing and enforcing the rules governing detention and demurrage charges.

Long term, the consequences of the Act will be determined by how the FMC responds to its new role.

The burden of far greater transparency is going to be laid at the door of shippers in the coming months as the legislation requires international ocean carriers to report to the FMC regarding how many empty containers are being transported.  Furthermore, the burden of proof regarding overcharging certain fees has been shifted from the complainant to the international ocean carriers in an attempt to level the playing field.

A senior supply chain analyst at research leaders Gartner, Brian Whitlock, summed up the consequences neatly when he noted that the problems are structural and that the long-term benefits that OSRA will bring won’t be immediately apparent when it comes to the market challenges that logistic leaders face right now, such as port congestion and high shipping rates.

There is no denying that soaring shipping costs have contributed to the inflationary environment, which is causing economic pain around the world, and that ocean carriers have a role to play in trying to contain those costs. But the reasons behind these cost pressures are complex, and no single act of Congress will change that overnight. The change will take time and require good faith from all the players.

In the short term, ocean carriers will be able to contribute to lowering prices and easing tensions in the industry by closely managing the detention and demurrage costs and by providing greater visibility tools that offer real insight into the workings of the industry. Hopefully, the fact that new legislation has passed will help solve some underlying problems and bring down the level of inflammatory rhetoric, which has risen almost as high as prices over the last two years.

International shipping has encountered many recent challenges to its normal operations. Ongoing conflicts have added complexity to transporting goods, and the COVID-19 pandemic wreaked havoc on supply chains and transport systems. Port strikes in Europe are the latest...
Read More

While the shortage of baby formula has been grabbing the headlines for months, the issues around importing pet food have been slightly overlooked, but they have also gotten more complicated due to the many forces that have been buffeting the global supply chain, such...
Read More